July 13, 2020
Carbon dioxide is a colorless and odorless gas at room temperature and pressure, and is also a common greenhouse gas. It is one of the components of air. Carbon dioxide has a boiling point of -78.5°C, a melting point of -56.6°C, a density greater than that of air (under standard conditions), and is soluble in water; it is chemically inactive and has high thermal stability (only 1.8% decomposes at 2000°C), Can not burn, and usually does not support burning. Carbon dioxide is mainly used in cold storage of perishable food (solid), as a refrigerant (liquid), the manufacture of carbonized soft drinks (gaseous), and a homogeneous reaction solvent (supercritical state), etc., many industries and products need to use, Therefore, the application field of carbon dioxide gas detector is very extensive.
Commonly used for detecting carbon dioxide is the electrochemical gas sensor, which is usually prevented from leaking junctions or more important locations; because the density of carbon dioxide is heavier than air, it is generally placed slightly below the detection location when it is placed. It is recommended to use BH-90A, K-600, BH-4S three products, of which K-600 is pump suction type, the detection speed is relatively fast.
BH-90A single gas detector          https://www.bosean.net/products/BH-90A_portable_single_gas_detector.html
K-600 single/multi gas detector  https://www.bosean.net/products/gas-detector-with-pump_1.html
BH-4S multi gas detector             https://www.bosean.net/products/BH-4S_portable_multi-gas_detector.html 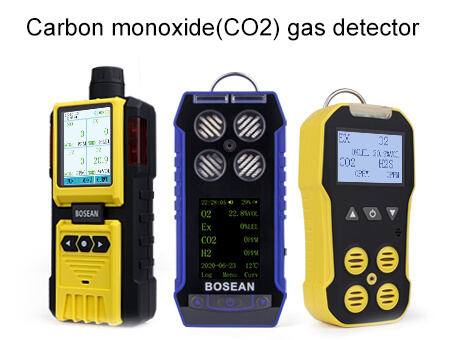